simulate a given number of hold-at-N turns of a game called Pig, and report the estimated probabilities of the possible scoring outcomes

For this assignment you will simulate a given number of hold-at-N turns of a game called Pig, and report the estimated probabilities of the possible scoring outcomes. You are NOT implementing the game of Pig, only a single turn of this game. The value of N will be acquired via user input, as will the number of repetitions.

Pig is a folk dice game with simple rules: Two players race to reach 100 points. In each turn, a player repeatedly rolls a die until either the player holds and is credited with the sum of the rolls so far (i.e. the current turn score) or rolls a 1 (“pig”), in which case the turn score is 0.

So at every point during a turn, the player is faced with a choice between two moves:

roll (again) – a roll of the die occurs

2 – 6: the number is added to the current turn score; the turn continues

1: the player loses all points accumulated in the turn (i.e. scores a 0); turn ends

hold – The turn ends as the the hold option is invoked for one reason or another.

A good strategy to help decide when to hold and when to roll is the “hold-at-N strategy”:
the player chooses a number, N, that will hopefully both maximize their turn score while minimizing their chances of losing that score by rolling a 1; as soon as their current turn score reaches (or passes) N, the player holds.

For instance, suppose the user asks the program to test the strategy for N = 20.
We throw the die for a turn (“simulate a turn”), and get the following rolls:

At this point we end the turn by holding, since we have a score of 22 (which is at least our N).

Of course, if we simulate the same turn again, we might get:

We rolled a 1 which according to the rules ends the turn and grants a turn score of 0.

Question: for N = 20, what range of scores are possible? How many variables will you need to hold the probability estimates for those scores? What if we choose another number for N?

Again, remember that you are only implementing one turn of this game and then simulating it many times to estimate the probability of each scoring outcome of this turn strategy.

You will of course, be using the C++ cstdlib library function rand(), which you will “prime” with a seed value using the function srand(int).

As you know, if you want to get different random values every time you run a program using the rand function, you should seed it with srand(time(0));

Your values may differ from the sample results, even using the seed 333, due to differing implementations of rand() on different operating systems.

Enter a single positive integer indicating the number at which to hold.

Enter a single positive integer indicating the number of turns to be simulated.

Larger numbers will tend to yield better estimations but take longer to execute.

We test with both small and large numbers, so testing may take some time.

Prompt the user with: “What value should we hold at? ”

Output a blank line between the input prompt and table output.

On the next line, print “Score” and “Estimated Probability” separated by a tab (‘\t’).

After the simulations, print a table line for each score outcome that occurred, in increasing order of score.

For each score outcome, print the score, a tab, and the fraction of turn simulations that yielded that score rounded to six digits after the decimal place.

Make sure you count the results from every simulation – it is easy to accidentally omit the first or last run from your calculation. This will be barely noticeable if you have 1,000,000 simulation runs – but it makes a big difference if you only have 3 or 4!

Example Runs (User input has been bolded and underlined for emphasis.) 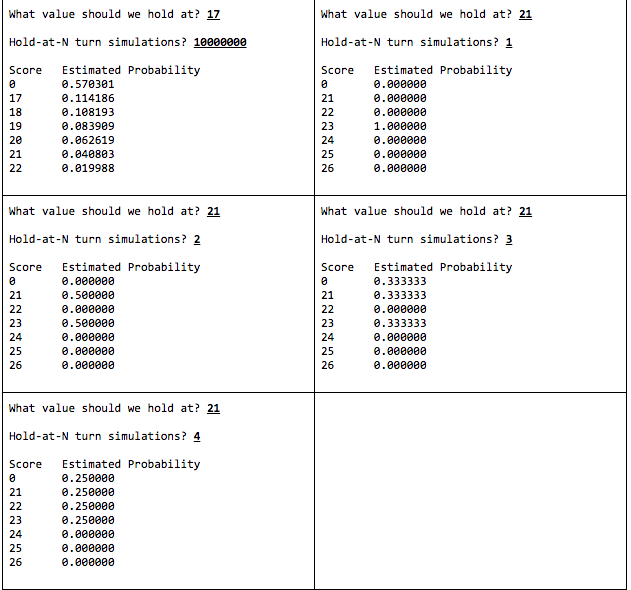 Notice that the results all have six digits to the right of the decimal (what formatting “manipulators” did we use to achieve that?)

So, for example, the 1 run simulation example estimates a 100% probability for the score that was actually rolled in the run.

What are the important considerations in choosing a Red Team (or attack team) for your software system? Give examples to justify your position.

Chapter 9 1. How does the source of your software code affect the overall security of the system? Justify your position for a general system. 2. What protections can you….

END_OF_DOCUMENT_TOKEN_TO_BE_REPLACED

Computer Network Q: Consider sending over HTTP a Web page that consists of one video clip, and five images. Suppose that the video clip is transported as 25 frames, and….

END_OF_DOCUMENT_TOKEN_TO_BE_REPLACED

The purpose of this assignment is to help you break down the final Individual Portfolio Project into smaller tasks and to obtain instructor feedback for each step.

The purpose of this assignment is to help you break down the final Individual Portfolio Project into smaller tasks and to obtain instructor feedback for each step. Please use the….