A grand piano from a famous maker is the aspiration and passion of pianists around the world. Professionals swear by their favourite brands, like Bösendorffer (from Vienna, Austria) or Steinway (from New York, USA). Some choose a handmade piano from a traditional family business like Grotrian-Steinweg (from Braunschweig, Germany). The manufacture of a piano is a traditional craft that requires highly specialist skills, true to the Latin origins of the word (manu = hand). Most people with a passion for music make do with a more mundane brand, such as Yamaha (from Yokohama, Japan). Yamaha brought together Japanese traditional passion for manufacturing excellence and a more recent passion for classical music to become the largest piano maker in the world in the 1990s. In 2008, Yamaha acquired the leading European manufacturer Bösendorffer for a stronger positioning in the premium segment.

With such a strong field of incumbents and strong loyalty to traditional brands, it may come as a surprise that a new kid on the block has been rolling up the market: in 2002, Pearl River (of Guangzhou, China) overtook Yamaha to become the largest piano producer in the world, making about 100  000  pianos every year. How did it achieve that? Given the relatively low prestige associated with Chinese-made goods, few would associate an aspirational product like a piano with ‘made in China’. Pearl River Piano was founded in 1956 in Guangzhou, next to the Pearl river. Pearl River’s centre of gravity has remained in China, where pianos have become more affordable with rising income. The one-child policy induced families to invest heavily in their only child’s education. As a result, the Chinese now buy half of the pianos produced in the world.

Pearl River succeeded in becoming the top selling brand in China. This may sound like an attractive market position. Yet rising demand has attracted numerous new entrants, many of which compete at the low end in China. These over 140 competitors have pushed Pearl River’s domestic market share from 70% at its peak a decade ago down to about 25% – although it is still the market leader. 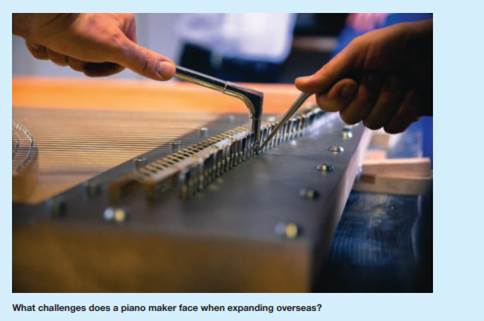 the importance of the US market and the limited international experiences of its management team, Pearl River hired an American with long experience in the piano industry, to head the subsidiary. Within two years, the greenfield subsidiary succeeded in getting Pearl River pianos into about one-third of the specialized US retail dealers. Within ten years, the Pearl River brand became the leader at the low end of the upright piano market in North America.

Efforts to penetrate the high-end market, however, were still frustrated. The Pearl River brand suffered from all the usual trappings associated with Chinese brands. ‘We are very cognisant that our pricing provides a strong incentive to buy’, Rich noted in a media interview, ‘but $6000 is still a lot of money’. In an audacious move to overcome buyers’ reservation about purchasing a high-end Chinese product, Pearl River made a second strategic FDI in 2000 by acquiring the brand Ritmüller. Founded in 1795, Ritmüller had manufactured pianos in Göttingen, Germany, for over 100 years, although the factory had closed during the recession of the late 1920s.

By reviving the ‘inactive brand’, Pearl River aimed to position itself in the European piano-making tradition and to move up-market. A new office in Munich focused on design, research and development. A newly-designed product line signalled commitment to a classic heritage and standard of excellence. Moreover, Pearl River commissioned international master piano designer Lothar Thomma to integrate German craftsmanship with the latest manufacturing technology.

In 2016, Pearl River stepped up its efforts to become a global player by taking over the largest German piano maker, Schimmel. This brand and its production sites in Germany and Poland enabled Pearl River to reach customers at home and abroad who considered ‘made in China’ not good enough for their piano. While the Ritmüller brand was successfully positioned in a higher market segment in China, it did not suffice for Pearl River to break into the premium segment.

By acquiring 90% of Schimmel, Pearl River could not only access a recognized premium brand ‘made in Germany’ but also state-of-the art production facilities. Schimmel continued to operate high autonomously under local management and with close involvement of the descendants of the founder.

Identify the DSM-5 diagnostic criteria that you notice in the case studies below and explain how the client meets the criteria.

Part 1: Case Studies Directions: Identify the DSM-5 diagnostic criteria that you notice in the case studies below and explain how the client meets the criteria. Include the diagnosis that….

END_OF_DOCUMENT_TOKEN_TO_BE_REPLACED

DECISION MAKING AT WORK Project 3.4 Customer Turnoffs Discussion You are sitting in the company lunchroom with two other CSRs, Doug and Christine. Doug is relating a troublesome customer problem….

END_OF_DOCUMENT_TOKEN_TO_BE_REPLACED

Drawing upon relevant theories from lectures and readings, write a four to five-page analysis of the change efforts made at NUMMI and General Motors

Listen (or read the transcript) to This American Life, episode 561: NUMMI 2015, which can be found at the following link: http://www.thisamericanlife.org/radio-archives/episode/561/nummi-2015 Drawing upon relevant theories from lectures and readings, write a four….